There are 7 types of plastic 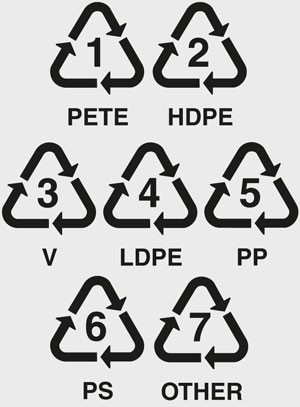 The plastic that is currently used is classified into seven types and each type is determined with number 1-7 in the triangle arrow. For example, the plastic bottle for drinking water, the symbol will be at the bottom of the bottle.

The second type is HDPE or High Density Polyethylene. It is the opaque plastic for containing milk, drinking water, bleach, washing liquid, shampoo, including for producing drug bottle and plastic bag.

The third type is PVC or Polyvinyl Chloride which is used for producing wrap, plastic rope, squeeze bottle for oil, washing liquid, and window cleaner. The product that is mostly used is shopping plastic bag in the shops, supermarkets, and convenience stores.

The fourth type is LDPE or Low Density Polyethylene to produce plastic bag, wrap, some types of plastic bottle, and the cold food bag for dessert, iced coffee and tea is mostly used.

The fifth type is PP or Polypropylene which is used to make erasor, contain syrup and yougurt, produce straw, nursing bottle, hot food bag for noodle and hot coffee, and disposable coffee and tea cup.

The sixth type is Polystyrene or known as foam which used to support the impact inside the carton for equipment such as refrigerator, radio, and television, produce food container, egg holder, and disposable bowl, spoon, fork, and knife.

The last type is other types of plastic such as Polycarbonate which is used for producing water bottle, jar, nursing bottle, 5-liter water bottle, and athlete water bottle, covering metal tin for food containing, and making clear bowl, spoon and fork, and knife.